From a young age, Jo Farrell had always known she wanted to become a police officer and make a difference to people’s lives.

After joining Cambridgeshire Constabulary aged 22, she has since spent almost 30 years of her career doing exactly that.

Now, as Chief Constable of Durham Constabulary, Jo says she has never been more proud to be at the forefront of policing, leading one of the highest rated forces in the country.

“It is an absolute honour and privilege to be leading this organisation,” she says.

“I was 22 when I joined the police and I absolutely loved it. Although I don’t have any family connections with the police, I had always wanted to join and I was so proud when I first became an officer.”

“As I still tell all our new recruits, when we get it right, we can have such a positive impact on people’s lives – the good that we can do is phenomenal.”

Born in Merseyside, Jo moved to Cambridgeshire at the age of 15. After completing a degree in Business at Sheffield Polytechnic in 1991, she achieved her childhood ambition by joining the police and becoming a Constable in Cambridge. Jo spent five years in the city centre beat before promotion.

In 2002, she joined Northumbria Police, initially as a Chief Inspector, and was promoted to Assistant Chief Constable, with responsibility for response and neighbourhood policing as well as the communications department.

Jo joined Durham Constabulary in November 2016 and has commanded the policing of a number of high profile events and incidents in recent years. She took the top job in June this year, becoming the first woman to hold the post of Chief Constable in the force’s 180-year history.

On a national level, she works on behalf of the National Police Chiefs’ Council in the areas of information management, criminal justice file quality and supports the Crimestoppers charity.

Jo is married to a retired police officer and has two stepsons and a daughter. Away from work, Jo enjoys family life, cooking and keeping fit. 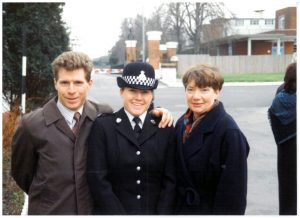 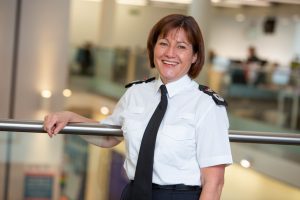