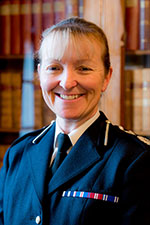 Hailing from Lymm in Cheshire, Dee attended school and university in Manchester, where she gained a BSc Jt Tons in Metallurgy and Mechanical Engineering. Dee’s policing career started in 1987 with Cleveland Police, where she specialised in roads policing and became its first female armed response officer before working her way up through the ranks to the position of Superintendent. Dee has worked as an Operational Sergeant, Inspector and Operations Manager and gained experience in training as a Chief Constable’s Staff Office and in the Professional Standards area.

Dee was also a police federation representative as an Inspector. In 2000, Dee was sent overseas to Germany, where she worked at the EXPO 200 event in Hanover. In August 2005, Dee joined Cumbria Constabulary as Commander of its South Basic Command Unit, where she was leading on policing in Barrow, Kendal and the Lake District National Park areas of Windermere, Ambleside and Coniston.

Dee acted as the force’s gender champion by leading on internal staff support matters. She was also the Branch Secretary of Cumbria Superintendents’ Association. In April 2007, Dee joined the Derbyshire Police as an Assistant Chief Constable Support and held the portfolio for human resources, confidence and equality, contact management and criminal justice.

In January 2010, Dee was seconded to the National Police Improvement Agency (NPIA) as a Syndicate Director for the 2010 Strategic Command Course. Dee later returned to Derbyshire Constabulary as an ACC Operational Support. This portfolio included operational support, contact management, criminal justice, special constables and volunteers. Dee also led on firearms, road policing and air support matters regionally. Nationally, Dee led on age issues within the force and was a member of the National Armed Policing Working Group. In 2013, Dee was awarded the Queen’s Police Medal for her contribution towards British policing, as well as the annual award for mentoring by BAWP.

Dee was previously the Chair of BAWP before stepping down to become a Committee Member, she has also been President of the International Association of Women in Policing. As Chief Constable of West Yorkshire Police, Dee was the Air Certificate holder for the National Police Air Service. Dee also oversaw regional assets including the North East Counter Terrorism Unit, the Regional Organised Crime Unit and the Regional Scientific Support Service. Dee was also the lead for gender issues, in the National Police Chief’s Council.

In 2018, Dee was award the CBE in recognition of her work supporting women within policing. Upon her retirement in April 2019, Dee has continued to support women in policing and gender equality. In her private life, Dee enjoys keeping fit by partaking in numerous activities such as skiing, walking and regular training at the gym.