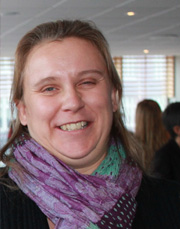 Nikki was Secretary of BAWP from Jun 2014 and is now Vice President of the Association, having been elected to the post in June 2017. She has been Joint Chair (Police Staff) of Northamptonshire Police Women’s Forum since 2012. She is passionate about coaching and development, and an active mentor, both in force and outside it. She is a Chartered Manager and is keen to ensure that Police Staff are well represented at all levels of the organisation and that the skills and knowledge of officers and staff are appreciated and shared for the benefit of all.

She has represented BAWP at numerous events, including an ENP conference (European Network of Policewomen) in 2014, IAWP (International Association of Women Police) Centenary Conference in 2015, and the Emergency Services Show since 2014, and has been part of the organising team for BAWP Awards for the past 2 years.

Her day job is PNC/PND Data Quality Manager for Northamptonshire Police, and she has 17yrs service with 2 forces, mostly in control room based supervisory roles but since 2011 she has been in IT contracts administration and systems administration before moving to her current position.

Outside of work Nikki owns several classic cars and is an enthusiastic member of her car club, attending numerous meetings and events every year, and recently completed a 3,500 mile drive around Europe. She enjoys motorsport and live music – the louder the better in both cases. She is a bell-ringer and organises ringing for weddings at a local village church.